A castor is a wheel that is driven solemnly due to friction force created due to other wheels driven by motors or engines.It is placed at the base of a large object so as to reduce the effort in moving that object. The main purpose of castor is to provide support to the moving object and ease in moving it in any direction. 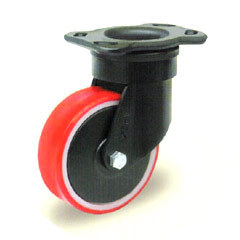 The Mecanum wheel is popularly used in holonomic drives,i.e. drives used for achieving motion in any direction. Bengt Ilon, a Swedish engineer invented this wheel.Therefore, it is also known as an Ilon wheel. 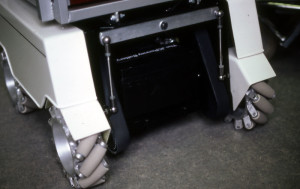 Rollers are arranged along the circumference of the wheel such that the axis of rotation of the rollers make an angle of 45° to the plane of the wheel. The rollers rotate about their axis which lies in a plane that is parallel to the axis of the wheel. On placing left and right-handed roller wheels at alternating positions, the wheels can be used to generate force in any direction as the wheels create force at right angles to the diagonal of the vehicle the wheel is on. Direction and turning motion can be achieved by varying the speed and sense of the wheels. Running all four wheels in the same direction creates a net forward or backward force after the cancellation of lateral forces, causing forward or backward movement respectively. Similarly, driving the wheels on one side in a direction opposite to that on the other side helps in turning the vehicle. For moving the vehicle sideways, wheels on one diagonal of the vehicle are driven in a direction opposite to those on the other diagonal. Combination of all these motions allows the vehicle to move in any direction in a 2D plane. 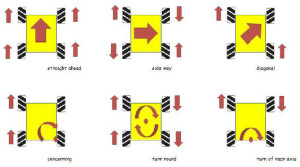 The Mecanum wheel is designed such that it allows for on spot rotation with minimal ground friction and low torque load on motors.

Galileo developed a peculiar wheel that is a combination of a wheel and a track . Initially ,it was used for purposes which required a lot of traction like heavy agricultural activities and for military use. Now , it is playing an important role in robotics as well. Its implementation has played an important role in the development of vehicles that are used on rough and non uniform terrains. The wheel property of the Galileo helps in maintaining stability on smooth surfaces while the track property comes handy on uneven surfaces.

Omni wheels or poly wheels are very much similar to Mecanum wheels. The difference lies in the arrangement of small discs around the circumference whose rolling axis lies perpendicular to the axis of the wheel. The resultant effect is that the wheel could roll as well as slide sideways with considerable ease. These wheels are often employed in holonomic drive systems. 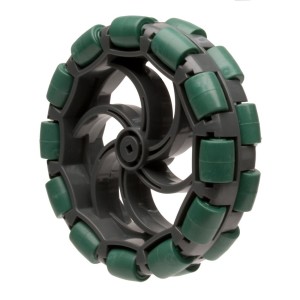 A platform employing three omni-wheels in a triangular configuration is generally called a Omniwheel Drive. It is a holonomic drive , meaning it can readily achieve motion in any direction .As you can see in the above picture, the direction of movement of the vehicle depends on the speed and sense of rotation of the wheels. The Omniwheel drive is very popular in many Robotics leagues . In competitions such as Robocon, many robots including ours used these wheels to have the ability to move in all directions.