Pneumatic cylinders they use the power of compressed gas to produce a force in a reciprocating linear motion. On actuation, compressed air enters into the cylindrical column through the port, at one end of the piston and, hence, imparts force on the piston. Therefore the piston is expanded in the process of expansion of the compressed air in order to reach a pressure equivalent to atmospheric pressure. 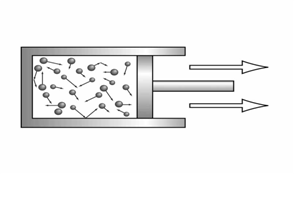 Pneumatic cylinders vary in appearance, size and function, they generally fall into one of the specific categories shown below.  There are numerous other types of pneumatic cylinder available, many of which are designed to fulfill specific and specialized functions.

Stoke length is a very important term while selecting a piston. Stroke length is the distance marked by the farthest ends of reciprocating vertical movement of the piston rod.

Two main types of cylinders are:

Single-acting cylinders (SAC) use the pressure imparted by compressed air to produce motion in one direction and a spring to return back to initial position in the other direction.

Double-acting cylinders (DAC) use the force of air to move in both the directions forward and backward. It has two input ports, so when air is pushed in through one port, it moves out through the other. 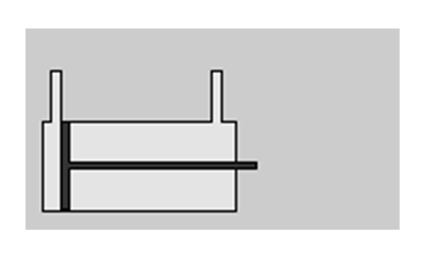 Due to the effective cross sectional area reduced by the area of the piston rod, the instroke force is less than the outstroke force when both are powered pneumatically and by same supply of compressed gas.

The relationship between the force, radius, and pressure can be derived from simple distributed load equation

Using the distributed load equation provided the  can be replaced with area of the piston surface where the pressure is acting on.

The AND and OR units work exactly the same way as AND and OR gates. i.e.

schematic diagram showing the working of the two gates. 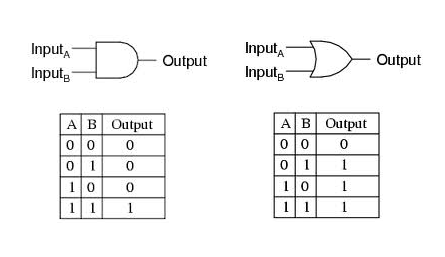