Once you run the files, a file can be saved in the MATLAB folder by using the Save option in the File menu in the Simulink window, or by hitting Ctrl-S in Simulink.

To open a previously saved file, use the Open option in the File menu in the Simulink window, or you could even do so by hitting Ctrl-O in Simulink.

Output of which would be 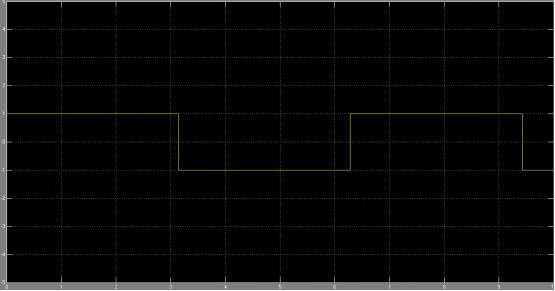 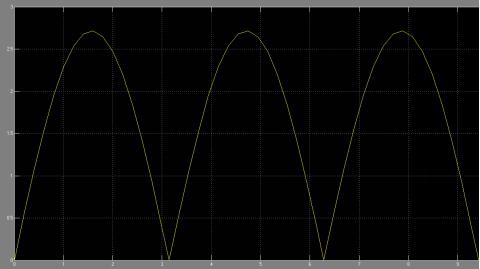 The two main objects of use in Simulink are (1) Blocks & (2) Lines
Blocks are used to create, modify and display signals.
Lines are used to transmit signals from one block to another.

Blocks can be of various types:

Used in the generation of signals

Used to output or display signals

These blocks can have zero to any number of inputs or outputs. Unused terminals are shown as small open triangles.

The blocks are connected via lines which primarily define the direction of signal flow from the output of one block to the input of the next block. At time it may be necessary to split the signal into two to serve as an input to two blocks; there exist two ways to do this.

MODELING OF A FIRST ORDER SYSTEM

To model any real time physical system in Simulink it is first necessary to create a mathematical model of the system. Thus we will take an example of the motion of a box on a floor with friction.

The horizontal forces can be represented in mathematical form as:

We thus consider our system constants as
M = 5 kg
B = 0.5 Nsm
On simplifying equation 1 we obtain

Now that we have obtained a mathematical model of our system we can proceed to build the system model.

We would need a Sum block (F-bv); a divide block(1/M); an Integrator block(To integrate eq. 2)
(Refer the link on blocks to know where you could find these)

Next for proper utilisation of the blocks we need to edit these blocks. We can do so by double clicking on the block.

First for the sum block, since we need to subtract the damping force from the motor force we need to change the second sign. After double clicking the block; the sum block parameters window as in fig.Here we replace the ‘+’ in the list of signs text box with ‘–’ 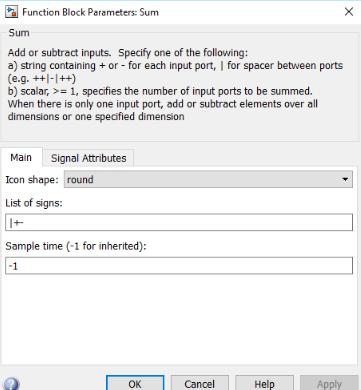 Now that we have the functions setup we need connect them by a line originating from the output of sum block and input(x) of divide block.

It makes it easier to deal with Simulink if the functions and lines have appropriate tags.

To create a label fot the line, double click on the line and a cursor will appear.

Now it is needed to use a constant block and edit its constant value to the mass (5) of the object.

Connect the constant blocks output to the second input of divide (÷).

Since the damping force is a product of damping coefficient and velocity; we insert a gain block and edit the number gain value to b(.5) and connect the output of the integrator to the input of Gain.

Your system till now should appear as in below figure 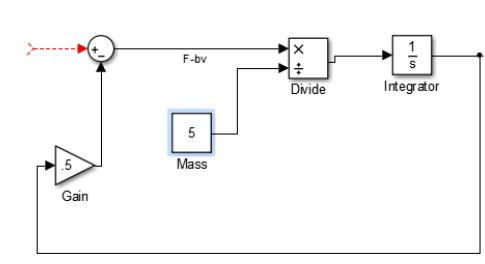 In order to view the graphical output of the system a scope is used.

Connect the output of the Integrator to the input of the scope.

Input Force to the system

For Step input parameters involved are

Time in seconds at which the step is desired

Value of the signal before the step

Value of the signal after the step

It is specified as a vector of two elements [Ts To]. Ts is the sampling time i.e. for a discrete model which produces its output every Ts seconds.

rate at which the value is to rise per second

The value at which the ramp input is to begin

The initial value of the system before the ramp

Next add a scope to the system, which can be found under sinks in the Simulink library browser, and connect the output i.e. x to the input of the scope. 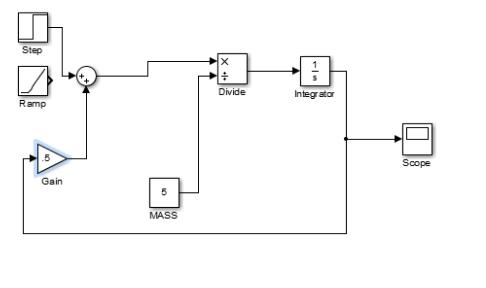